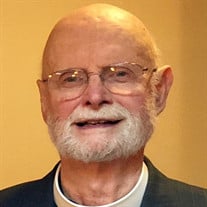 The Rev. Elmer L. Sullivan of Ewing Township died on September 29, 2019 in Trenton, NJ. Known to his friends as "Pat," he was born in Philadelphia, PA, in 1930. His family moved to Hamilton Township, Mercer County, NJ, In 1935 where he was educated in the local schools and was graduated from Hamilton High School in 1948. Father Sullivan attended Dartmouth College in Hanover, NH, where he majored in philosophy and was awarded an A. B. Degree, magna cum laude and Phi Beta Kappa in 1952. He studied for the priesthood at The General Theological Seminary of The Episcopal Church in New York City and received a degree of Bachelor of Sacred Theology in 1955. Later in life, he took classes at the Princeton Theological Seminary in Princeton, NJ, for an M. Div. Degree in 1978. Ordained to the diaconate and priesthood in the Episcopal Diocese of New Jersey in 1955, he served for many years as Rector of St. Luke's Church, Prospect Heights, Ewing Township. In addition, he was Rector of St. Augustine's Church, Elizabeth, NJ, from 1967 to 1974, and Interim Vicar of St. Michael's Church, Trenton, from 1991 to 1994. He also worked as an administrator for the Episcopal Diocese of New Jersey in Trenton from 1983 to 1990. He was predeceased by his parents, Robert E. Sullivan, Sr. and Marion F. L. Sullivan of Hamilton Township, and a brother, Dr. John M. Sullivan of Ypsilanti, MI. He is survived by his wife of 52 years, Jean C. Sullivan of Ewing; a son, Jonathan P. Sullivan and his wife Cynthia A. Fink of McLean, VA; a daughter, Elizabeth J. Barnts of Chehalis, WA; a son-in-law, Brett E. Barnts of Curtis, WA; a brother, The Rev. Robert E. Sullivan, Jr., of Bradenton, FL; a sister-in-law, Bernice F. Sullivan of Ypsilanti, MI; and a brother-in-law and sister-in law, Charles and Virginia Palumbo of West Trenton. He is also survived by three grandchildren, Timothy J. Sullivan and Rebecca J. Sullivan of McLean, VA; and Ruby E. Barnts of Curtis, WA, as well as 20 nieces and nephews. Calling hours will be held at Murphy Funeral Home and Cremation Service, 935 Parkway Ave., Ewing, NJ, on Thursday, October 3, 2019 from 6:00 to 8:00 PM. A requiem mass will be celebrated at Christ Church, 130 Prince Street, Bordentown, NJ, on Friday, October 4, 2019 at 2:00 PM with interment in the churchyard. The family asks that in lieu of flowers donations be made in memory of Father Sullivan to Fox Chase Cancer Center.

The Rev. Elmer L. Sullivan of Ewing Township died on September 29, 2019 in Trenton, NJ. Known to his friends as "Pat," he was born in Philadelphia, PA, in 1930. His family moved to Hamilton Township, Mercer County, NJ, In 1935 where he... View Obituary & Service Information

The family of Elmer L Sullivan created this Life Tributes page to make it easy to share your memories.

Send flowers to the Sullivan family.