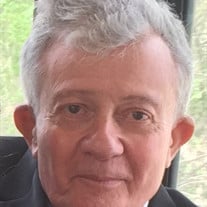 Winston C. Wright, 75 of Pennington, NJ, passed away peacefully, surrounded by his loving family on Thursday, February 7, 2019 at St. Joseph's Skilled Nursing Facility in Lawrenceville, NJ. Born July 9, 1943 in West Union, West Virginia he was raised in Cleveland, Ohio and graduated from West Tech High School in 1961. He proudly served his country in the United States Air Force. While stationed at McGuire Air Force Base he met the love of his life, Joy, and they shared 53 years of marriage. A parishioner of the Catholic Community of Hopewell Valley at St. George Church, he retired from FMC in Princeton with 30 years of service. He enjoyed bowling and loved to dance, but his favorite times were spent with his family. Son of the late Leonard and Flossie Wright, he is survived by his wife Joy Kiernan Wright, his daughter Sharon Roberto, his son and daughter in law Michael and Shannon Wright, grandson's Timothy Roberto and his fiancé Stacey Petty, Trevor Roberto and Patrick Wright. He is also survived by cousin Sue Williams of Columbus, Ohio; Brothers and sisters in-law, Jack and Pat Kiernan, Pat and Judy Kiernan, Rich and Carol Kiernan and many nieces and nephews. He was predeceased by his sister in-law and brother in-law, Kathleen and Gerald Miller. The Family wishes to thank the many dedicated staff members of St. Joseph SNF for the kind and loving care they provided to Win while he was in residence there. Due to flower restrictions at the cemetery, donations may be made to St. George Church, 1370 River Road, PO BOX 324, Titusville, NJ 08560. Family and friends are kindly invited to attend Winston's visitation on Friday, February 15, 2019 from 10am to 10:45am with a Mass of Christian Burial to follow at St. George Church located at 1370 River Road, Titusville, NJ 08560. Winston will be laid to rest at Brigadier General W. C. Doyle Veterans Cemetery located at 350 Province Line Road. Wrightstown, NJ 08562

The family of Winston Wright created this Life Tributes page to make it easy to share your memories.

Send flowers to the Wright family.